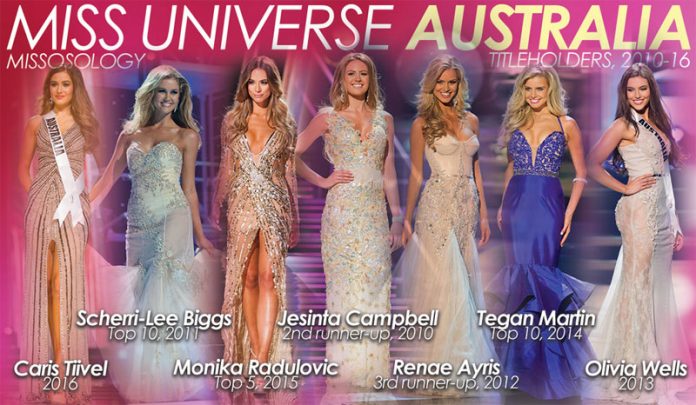 Lots of chatter were heard in the grapevine when Olivia Wells fell short of her mission in Moscow back in 2013 and the same chatter were heard earlier this year. Mainly negative bordering doomsaying, these chatters are plain rubbish. It is important to make one thing clear – Australia is still a force at Miss Universe.

There is no denying that there is constant power struggle within the Australian beauty pageant scene. But like in 2013, it is completely wrong to say that the golden era of Australia is over. In fact, Missosology can categorically say that it is far from over and this despite the exclusion of Caris Tiivel from the semis at the 65th Miss Universe pageant.

Tonight, the new Miss Universe Australia will be crowned. There is a bevy of smart, beautiful and confident hopefuls that the judges can pick the winner from. Any of these women can represent Australia at the world stage with pride. While there is still some residual lack of faith in the aftermath of Caris’ failure, Australia is bound to bounce back. The country, after all, always stands up when it falls down.