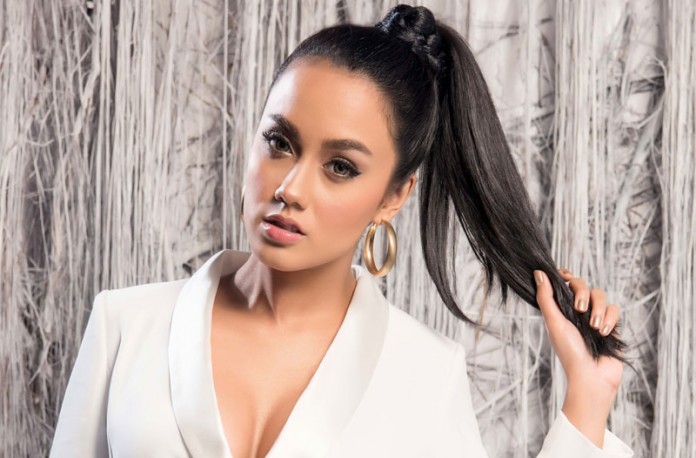 Intan Aletrino is the embodiment of the fusion of east and west. She was born and raised in the Netherlands and is now spending most of her time in Indonesia allowing her to experience two cultures that are world’s apart. Like her life, Intan is an Oriental beauty with a global charm. She had been named the strongest candidate at the Miss Supranational 2016 contest in Missosology’s 2nd Hot Picks.

Before she left Jakarta for Poland, Missosology got a chance to talk to her. Meet this amazingly beautiful woman who is raring to go to win her country’s first major international crown! Tell us about yourself and the town where you grew up.

I was born in Venlo, the Netherlands on June 30, 1993. I grew up in two different cultures but my parents introduced me to Indonesian culture and traditions since I was a child.

When I was in junior high school I was used to combine school with a side job delivering newspapers. I continued doing this when I moved to Indonesia in 2009. During my senior high school and university, I pursued my education and at the same time doing modeling and working as a TV host. What will make you stand-out in Poland during the Miss Supranational competition?

In February 2016, I was crowned as Puteri Indonesia Pariwisata (Tourism) and I will represent my country in Miss Supranational 2016. One important purpose of being Puteri Indonesia is to be an avid advocate in promoting Indonesian tourism and educating about its rich cultures, traditions and tourism to the world.

One aspect that I love the most about Indonesia is that it is a country with unique strengths in fashion. It is rich in culture with bountiful natural resources, creative knowledge, talented local designers and a booming fashion industry. I am intending to showcase the truly unique of Indonesian cultures through fashion and style during the Miss Supranational competition.

I am grateful that Mustika Ratu dan Puteri Indonesia Foundation has assisted me in being able to work collaboratively with some talented Indonesian designers to prepare and design the wardrobe for Miss Supranational. There will be a great National Costume (which we won last year), a modern take of Traditional Kebaya (Indonesia’s style of an evening gown) and various ‘ready to wear’ outfits and accessories

I believe that through fashion, we can express the creativity, style and history of a culture and my own identity. As Rachael Zoe famously quoted “A style is a way to say who you are without having to speak.” What is your reaction now that Miss Supranational is considered as one of the major international beauty pageants?

On a side note, Indonesia has gained huge momentum in beauty pageant achievements recently and it will continue to do so. With the immense public support (which will increase exponentially soon given its large 250 million population) and enthusiasm of neighboring pageant fanatic countries such as the Philippines and Thailand. I am really looking forward to being able to represent Indonesia and educate about the Miss Supranational motto and purpose to the region and globally.

How would you describe your country to your fellow candidates?

Indonesia is located in South East Asia region and it’s an island nation. Indonesia has about 300 ethnic groups and its archipelago has around 13,466 islands (not including the tidal islands or rocky reefs!) so there are plenty of beautiful islands to visit – aside from Bali.  And yes, Bali is part of Indonesia!

Historically, Indonesia’s culture has been shaped by a long interaction between original indigenous customs and multiple foreign influences from as far as the Middle East, South Asia and the Far East resulting in a multitude of religions including Hinduism, Buddhism, Confucianism, Islam and Christianity. Indonesia also embraces various customs of life, music, arts, dance, languages and traditional costumes.

Given the vast ethnic groups, Indonesia is governed by the sacrosanct motto of ‘Unity in Diversity’ or also known as ‘Bhineka Tunggal Ika’. It is the spirit of life in Indonesia to herald its people to live side by side in harmony and peace albeit vast differences of religion, race, tribe and ethnicity.

My parents brought me up with the values of respect and tolerance which allowed me to embrace and celebrate cultural diversity and also international understanding, this diversity is an integral part of Indonesia’s past and makes it the country that it is today. Which country do you dream visiting since you were young and why?

I was brought up in Netherlands until I was 16 years old and therefore, I always wanted to visit Indonesia to learn and understand my parent’s background.

Do you think that beauty pageants are outdated? Why or why not?

It has always been my dream to participate in a beauty pageant since I was young.

I understand that some people perceive beauty pageants as a skin deep, superficial and that it is all about glamour and degrading women and that therefore, they are outdated. We need to be realistic that a beauty pageant will always be viewed from two different perspectives and disagreement will always exist between pageant lovers and critics

In my personal view, a beauty pageant is just like the Olympics! You must have resilience, solid determination, stamina and self-discipline. It is also a platform to be your own driver or ‘an agent of change’ for anything you would like to pursue in life.

There are a few things I see in a Beauty Pageant:

In my world, I will take advantage of competing in Miss Supranational as a platform to promote Indonesian tourism and spread the word of what Indonesia has to offer.

I also perceive beauty pageants as a medium to build relationships and sisterhood amongst other candidates, sponsors, organizers and the host country. So far, I have enjoyed support from many previous Miss Indonesia winners to prepare for Miss Supranational and I also have started a conversation with other Miss Supranational candidates! I cannot wait to meet them in person!

However, what I value the most about Beauty Pageants is that they can allow me to become an inspiring role model to young girls in Indonesia and around the world.  I hope that I can reach them and give them encouragement and a sense of confidence to be able to express themselves and remain true to themselves in pursuing their own goals. I will encourage them to pursue their dreams, have self-confidence, know their self-worth, and educate them that no matter what their ambitions are in life – they must be ready and prepared to work extremely hard to achieve their goals.

In my opinion, these values and purposes of Beauty Pageants are relevant to all other aspect of daily life. In the current uncertain state of the world, there are so many global issues we are facing today. However, the issue that is closest to my heart is the current refugee crisis and especially it’s impacting on children – our legacy for the future should be alleviating the suffering from this crisis.

United Nations High Commissioner for Refugees (UNCHCR) has recorded the highest level of worldwide displacement from wars, conflict, and persecution and it continues to accelerate.

By the end of 2014, it was recorded that almost 60 million people were forcibly displaced from their own homes and countries. This was the highest number since the end of World War II.

Alarmingly, out of twenty million of those who were displaced, half of them were children fleeing wars, conflict and persecution.  It saddened me so much just from imagining the struggle and traumas that they go through just to survive.

There are no easy solutions but in my opinion, there needs to be regular discussion amongst and with world leaders, especially from the richest countries. World leaders need to be encouraged to open their hearts to plan for a better resettlement policy for refugees.

Globally, we all need to work together and have solid leadership to save as many refugee lives and resettle them in welcoming and safe countries. I think all governments need to combat all kinds of prejudice and racial discrimination and educate residents to be compassionate and live and work together with refugees in good harmony.

It is our responsibility to resolve this crisis and we call all start with our own small personal contribution in daily life such as helping any refugees whenever you see them and donating used clothes or money whenever you can.

What are your future plans beyond the Miss Supranational pageant?

I’m planning to continue my masters and having a career as an entrepreneur.

And finally a message to all of your fans at Missosology. Special thanks to Mega Angkasa for facilitating the interview. Missosology wishes Intan all the best at Miss Supranational 2016 pageant.