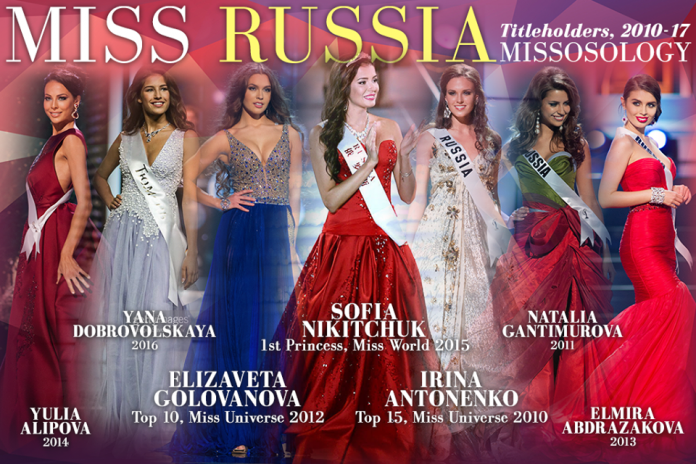 The Miss Russia pageant has this tradition of sending its overall winner to both Miss Universe and Miss World contests and while it has some level of success in both pageants, Miss World is where the pageant should concentrate. In fact the Miss Russia organization is exactly doing what it should do since 2015 and it was rewarded by a first runner-up finish at Miss World 2015.

Russia should understand that it had a better chance at Miss Universe during the Trump era. The list of Russian accomplishment at Trump’s Miss Universe was actually pretty encouraging: Vera Krasova in Top 5 (2008), Ilmira Shamsutdinova as Top 6 in 1996, Anna Malova (1998), Oksana Kalandyrets (2001), Anna Litvinova (2006), Irina Antonenko (2010), and Elizaveta Golovanova (2012) as semifinalists, and of course Oxana Federova as Miss Universe 2002. Now that Trump no longer owns the pageant, Russia ran out of luck and it is very likely that it will remain that way for quite some time.

Meanwhile, the first runner-up finish of Sofia Nikitchuk at Miss World 2015 is sending a strong message that Russia has a good chance at the pageant. True, in 2016 Yana Dobrovolskaya failed to be in the semis but Russia should not be discouraged. Their prospect of having a third Miss World is very much bright.

The Miss Russia organization can also coax Miss World to award them the title by hosting the Miss World pageant or keep on inviting Miss World winners to their national pageant. Unfortunately, this is not a surefire formula as evidenced by what is happening in other countries. Still Russian beauty queens are actually strong and very competitive. It is perhaps just a matter of how they can persuade the major international beauty pageants to bestow them a crown. For Miss World, hosting their pageant seems to be a whole lot of persuasion.