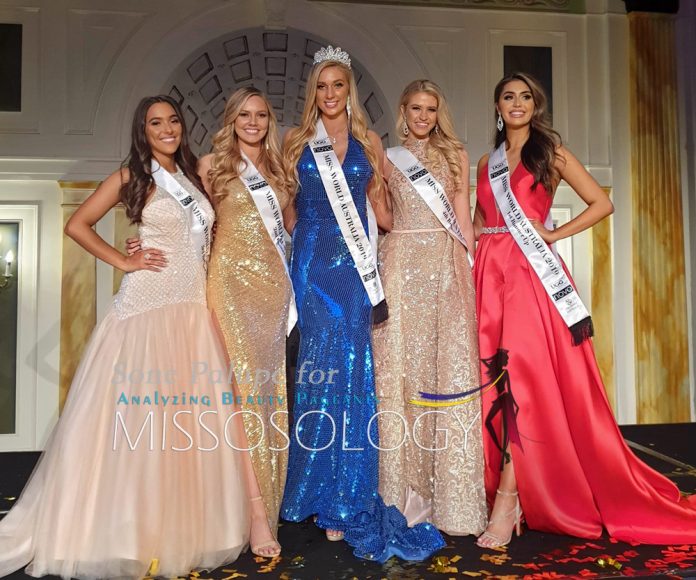 Sarah Marschke has been crowned as the new Miss World Australia. The tall blonde beauty will soon fly to London to represent the Land Down Under in the oldest and largest among the Big 5 pageants.  Sarah hails from Becksly and is currently training to be drafted to the Sydney Swans football team. She is also a singer/songwriter and a radio presenter.

As the contest progressed, the Top 5 was chosen. Sophia Harris became the 4th runner-up, Clara Momesso is the 3rd runner-up while Tasha Ross and Jenaya Elliot are the first and second runners-up respectively.

Australia has two Miss World winners – Penelope Plummer (1968) and Belinda Green (1972). The last time Australia made it to the semis of Miss World was 2016 when Madeline Cowe made to the Top 20

This website uses cookies to improve your experience while you navigate through the website. Out of these, the cookies that are categorized as necessary are stored on your browser as they are essential for the working of basic functionalities of the website. We also use third-party cookies that help us analyze and understand how you use this website. These cookies will be stored in your browser only with your consent. You also have the option to opt-out of these cookies. But opting out of some of these cookies may affect your browsing experience.
Necessary Always Enabled
Necessary cookies are absolutely essential for the website to function properly. This category only includes cookies that ensures basic functionalities and security features of the website. These cookies do not store any personal information.
Non-necessary
Any cookies that may not be particularly necessary for the website to function and is used specifically to collect user personal data via analytics, ads, other embedded contents are termed as non-necessary cookies. It is mandatory to procure user consent prior to running these cookies on your website.
SAVE & ACCEPT
//phoalard.net/4/2224625