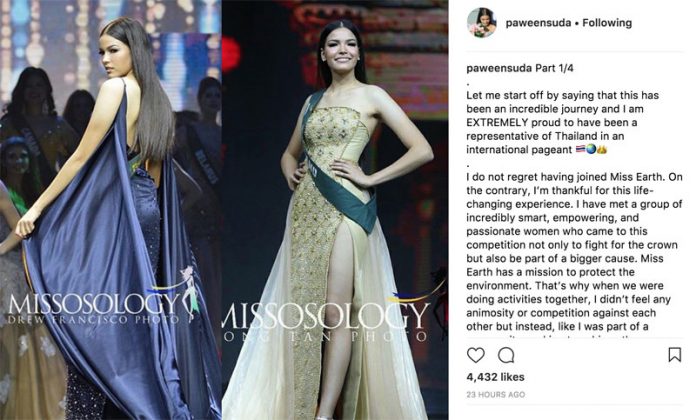 The world could have been a better place had Miss Thailand Paweensuda Drouin won the Miss Earth 2017 pageant. Alas, it was not meant to be. She was predicted by Missosology to win and even named as Missosology’s People’s Choice Winner.

Missosology had been very vocal about its disappointment of the results of Miss Earth 2017. It seems only the Filipinos (actually not all of them) were happy about the local girl winning while the rest of the world doesn’t know whether to cry or to laugh. But unlike what happened in Miss Universe 2014 and Miss Universe 2015, the candidates of Miss Earth 2017 don’t have anything bad to say about the winner.

Miss Colombia Juliana Franco who was named as Miss Earth-Water, called Miss Earth 2017 Karen Ibasco as a real queen. Meanwhile, in her lengthy Instagram post, Miss Thailand Paweensuda Drouin congratulated Karen and further said that the winners “are our representatives and I know you will do a great job not only raising awareness but also making an impact”.

The Miss Earth organization had been lambasted by fans left and right for crowning the local girl which they believe is not the most beautiful among the Top 4 but still, Paweensuda said that she did not regret having joined Miss Earth.

“On the contrary, I’m thankful for this life-changing experience. I have met a group of incredibly smart, empowering, and passionate women who came to this competition not only to fight for the crown but also be part of a bigger cause,” she posted on her Instagram.

“That’s why when we were doing activities together, I didn’t feel any animosity or competition against each other but instead, like I was part of a community working to achieve the same goal which was fighting climate change,” she added.

Disappointment over the results of a Big5 pageant happens now and then. In 2009, fans were up in arms against Miss World when Miss Mexico Perla Beltrán finished as runner-up to Gibraltar’s Kaiane Aldorino. In 2012, when Miss International crowned Ikumi Yoshimatsu, the first ever Japanese winner for the Japan-based pageant, the fans, along with Missosology, were very vocal with their opposition with the results. So, despite of all these ill-feelings, the post of Paweensuda showed her true character and reflects the overall sentiment of those who participated in the Miss Earth 2017 pageant. It is, in essence, a conviction of a true beauty queen.

What’s next for Paweensuda then? She posted that she will follow the footsteps of the late and revered Thai king King Bhumibol Adulyadej and be involved in more environmentally friendly projects. She quoted her fellow Miss Earth 2017 contestant, Miss USA Virgin Islands Kaylee Carlberg, “You are not given the crown to reign, but to serve”.

With all the hullabaloo and the threat of removing Miss Earth 2017 from the Big5, the winner of this ruckus is no other than Miss Earth. It is after all a pageant which vows to create an environmentalist out of each and every contestant. The Instagram post of Paweensuda simply proved that Miss Earth has achieved what it wanted in the first place. 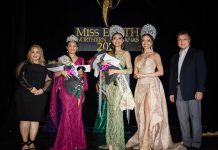