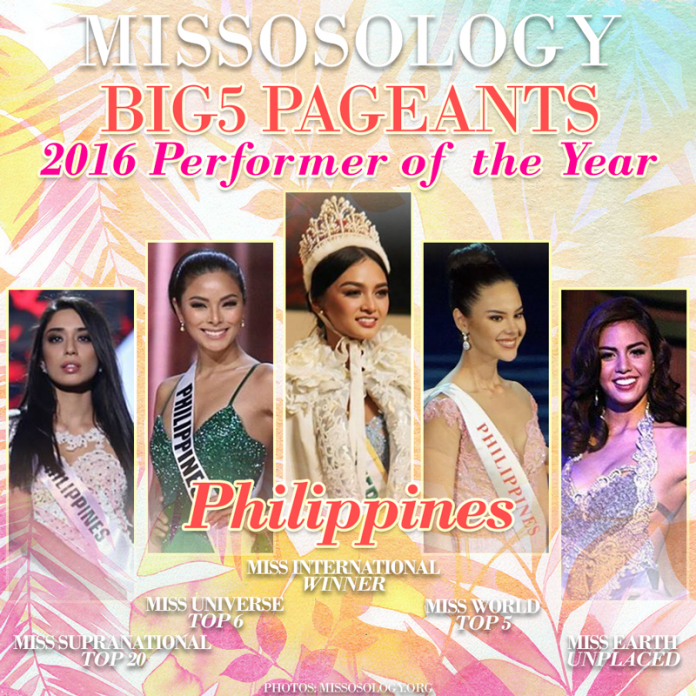 At the conclusion of the 65th Miss Universe pageant, the Philippines has sealed its supremacy in the field of pageantry as it claims the Big 5 Performer of the Year title, earning such accolades for the fourth time in five years.  Gaining 130 additional points courtesy of Maxine Medina’s Top 6 placement at Miss Universe, the Philippines overtook Indonesia in the lead, amassing a total of 540 points.  Prior to Miss Universe, Indonesia was leading the race, but had to settle for a decent runner-up position when Kezia Warouw only managed to reach the Top 13. (CLICK HERE for the previous ranking)

With an additional 50 points, Indonesia earned a total of 490 points, and has officially landed in the Hall of Fame (see below) for the very first time in history.   Last year’s runner-up, USA, only landed in third pace with a total of 456 points.  Australia, which was expected to place high in Miss Universe, failed to sustain their momentum, and dropped to fourth position with a total of 390 points.  Ironically, it was only in Miss Universe that this supposedly MU-powerhouse country failed to make the first cut among all of the Big 5 pageants.  Mexico is in a well-respected fifth position with 372 points.  Although they failed to get a crown nor a runner-up position in any of the Big 5 pageants, they were able to enter the first cut in all, but Miss World.

Interestingly, Venezuela’s salvation were on Miss Supranational and Miss Earth, two of the youngest Big 5 pageants.  Despite the disappointing non-placement of all of Osmel Souza’s girls in Miss International, Miss World and Miss Universe, they were able to gather 370 points.  Colombia’s 2nd Runner-up finish at Miss Universe pulled up their scores to tie with Venezuela in sixth place.  Brazil, Thailand and Russia complete the Top 10.

With Philippines and Indonesia getting the Top 2 spots – the first in history – the Asian countries actually dominated the ranking with seven of them making it into the Top 20.  This is an indication of the gradual shift in pageant domination by Asian countries, which is traditionally a Latin American domain.  Europe, which used to be the leaders in the early days of pageantry, only had Russia, France and Poland in the Top 20.  Kenya is the lone African in the Top 20, thanks to their outstanding placements in Miss World and Miss Universe.

BIG 5 PERFORMER OF THE YEAR